By Sean Mulligan on 9th October 2018 in Beavers, District 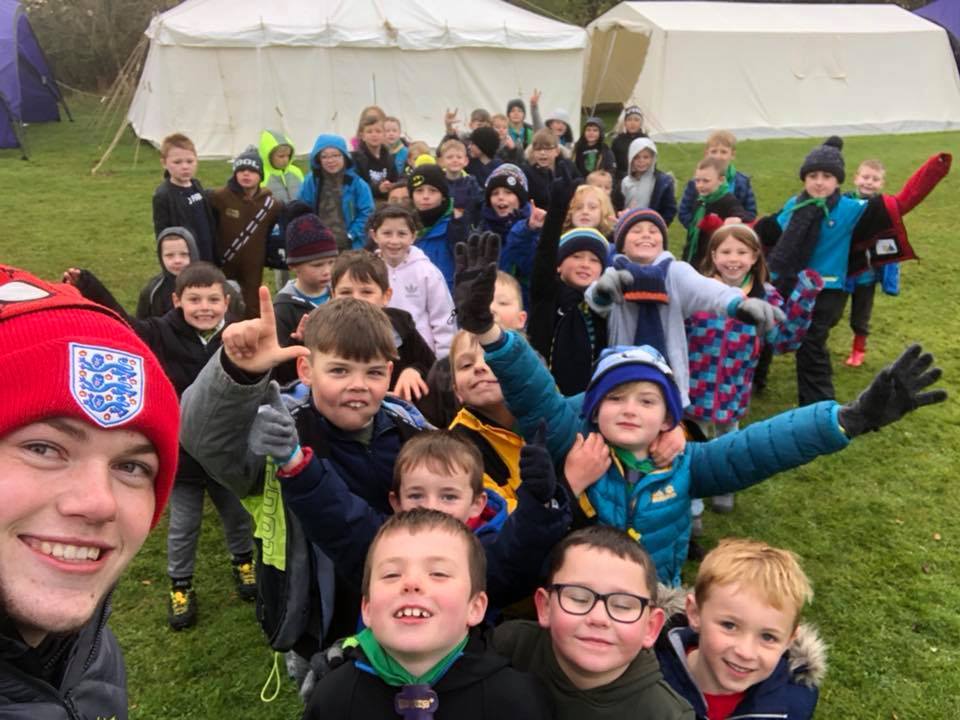 On Saturday 6th October 2018, 50 Beavers from Tynemouth District were collected from District Headquarters and The Jolly Bowman in Wallsend for a weekend of adventure and those important skills for life!

The early morning start ensured all Beavers gained as much as possible whilst at camp.

With all Beavers & Leaders on the bus it was time to depart and head up to Selby Woods in Morpeth taking about 30-40 minutes until the Beaver Damboree could begin.

With lots of small country roads to venture along before arriving at the destination of Selby Wood the bus was too large to fit down the final road so it was arranged that a trailer would pick up all of the bags and take them down to the site with a little walk left down a track to get to the site.

With the short hike ( I mean run… because as Beavers do… try to catch the trailer as it goes down the track!) we finally arrived on site to be greeted by a group of Leaders who went up on Friday night to ensure the site was in perfect condition with everything set up and raring to go including all tents.

We started the weekend with a short chat from Gillian (Assistant District Commissioner for Beavers) welcoming everyone to the site and setting out a few rules. After this is was time to make a #Damboree sign out of all natural materials.

Shortly after the Beavers completed their sign spelling out DAMBOREE on the floor we all came together in the middle of the site to listen to Sean (District Youth Commissioner) who put all Beavers into teams which they would be in for the whole weekend. Yellow, Green, Blue, Red and Purple teams would allow all Beavers to make new friends with Beavers from other groups.

We started the Damboree with our first base of the weekend.Â  Each base that the Beavers would be taking part in would allow all Beavers to gain the all important Damboree badge.

Each base was carefully planned and organised to ensure that all Beavers enhanced their adventures whilst on their journey through Scouting.

Straight after the first activity it was time for lunch! With the Beavers being able to go choose what sandwich, snack, crisps and piece of fruit they wanted then as the sun was shining everyone congregated outside and ate lunch together in the middle of the activity field.

Base 2 was slowly creeping upon us with the Beavers itching to get going again all the Base leaders took their young people to complete the next activity.

We then all gathered back in the middle again so the next stage could be explained and ensuring all Beavers still had their passports and water bottles. Before heading off for their third base of the day.

After the third base it was time for a snack, everyone gathered back in the middle once again and team by team went to grab a biscuit and drink before coming out once again and all sitting together.

After exceptional behavior and such hard work the leaders agreed some free time in order for our Beavers so on came the music and the Beavers enjoyed some free time, a bit of a dance, a few races with Amy and Daniel, showing Sean how to ‘Floss’ and how to ‘Take the L?’ … No idea either…

The Beavers quickly completed the final two bases to finish all the activities off for the day. With all Beavers collecting 5 out of 5 star stickers for each of the bases it was time for a bit more free time before having tea.

The Beavers all competed in their teams in a few relay races to burn off that little bit of extra energy before heading in for Meatballs and Pasta which was on the menu for tea.

Shortly after all Beavers and Leaders had their tea it was noticed by a few Beavers that it was going dark outside… with the evening programme getting closer the Beavers were sent to go put their coats on along with any hats, scarfs or gloves they might have before all congregating in the centre once again to await instructions.

The first part of the evening was to listen to a story from Gillian and Vanessa inside the marquee with glow sticks. With all Beavers around in a circle each having a glow stick to light up the tent in a vast range of colours.

After the story the Beavers headed down to the campfire where the fire was glowing in the bottom of the field with benches around the outside.

The Beavers congregated around the campfire and joined in with some songs.

At this point we had some tired Beavers so we got some hot chocolate and biscuits before going to the toilet and heading off to bed looking at the impeccable clear night sky before zipping up our tents.

We had some quite excited Beavers who for a lot of them was their first time sleeping outside in a tent without their parents so were quite chatty to begin with whilst they got used to their surroundings but before long all the torches were out and the Beavers were asleep.

Near enough on the dot at 5:30 all Beavers were back up chatting and remembering who was in the tent next to them by talking to them too. However since it was still cold outside the leaders outside reminded the young people to stay inside their sleeping bags and not to be too loud to wake up any of the other leaders.

At about 7am the Beavers all came out of their tents ready for the day ahead. To start the day off we completed a Shake Up , Wake Up routine led by Amy which was well needed with some chattering teeth and shivering Beavers around before Daniel lead us in a conga (Because, why not?)

The Beavers then headed inside for Breakfast with Cereal first before Eggy Bread.

Since it was our last day it was time to go sort out our things and go pack all our bags ready to go home with the help of leaders to stuff the sleeping bags in their original bags, some in the next tent along (don’t ask how…) we all managed to get packed up and congregate back in the middle to find out what today’s activities were going to consist of.

2 teams would now join to play some games with Vanessa whilst the other three would join together to go with Sean, Chris and Daniel to go discuss how they thought the weekend went and be involved in a youth forum.

This ranged from sleeping to fire lighting to not wanting to go home. We then welcomed a visitor as Stu Bennett arrived who is the County Youth Commissioner who was eager to hear about what the Beavers have got up to over the weekend.

The two groups then swapped over gaining the last two star stickers to gain their Damboree badge.

After the seventh base was completed all Beavers had some lunch before heading back outside to have one last run around whilst the last few things were taken down.

We then welcomed our second visitor as Katy McClen (Assistant County Commissioner for Beavers)Â Â arrived on site who again was eager to find out how the first Beaver Damboree in Northumberland went and how much the Beavers enjoyed it.

Shortly after Katy spoke to the Beavers we got a call that the coach had arrived and it was time to leave, so all Beavers got in a long line and hiked back up the track to the very top and onto the coach.

I’m sure all of the leaders would join me in congratulating all of the Beavers for being so well behaved throughout the weekend and giving every challenge a go without being asked twice. It has been great to see so many smiling faces and Beavers making new friends and memories which will last forever!

Thank you to all the leaders and helpers who made #TynemouthDamboree possible, without all your support and hard work, this wouldn’t have been possible!

You are all amazing!

Scout’s Collect For The Bay Foodbank

Important This site makes use of cookies which may contain tracking information about visitors. By continuing to browse this site you agree to our use of cookies.